I had only one non-negotiable condition when my partner and I were house-hunting in Cardiff years ago: the back garden had to be facing either south or west or south-west to get the maximum possible sunlight. So it was we bought this house with its perfect south-west rear aspect which allows the garden to grab every ray of sun there is from dawn to dusk. The rising damp, falling damp, penetrating damp, dry rot, wet rot, woodworm, crumbling pointing, sagging roof, clapped-out plumbing and dodgy wiring of the 1880s Tredegar Estate terrace didn’t matter; I’d got my sun-trap.

The garden then was just a lawn, a shed and a charmingly old-hat herbaceous border, home to three wonderfully fragrant Tea roses (flowering in vivid apricot, crimson and lemon), a venerable woody fuchsia weighed down with its ‘ballerina’ flowers from April to December, a giant hydrangea boasting fat white orbs of flowering heads, and a magnificent paeony, the tricky-to-grow “Queen of the Herbaceous Border”. Like a thing demented I proceeded to make exactly the same mistake I had made in all my previous gardens: overplanting. In my haste to create an oasis for wildlife, as well as block all sight-lines from neighbouring houses, I planted over 40 different species in a usable area of just 9m x 6m (30ft x 20ft – Lord Tredegar was not a generous man). No prizes for guessing the outcome.  Yep, a jungle. 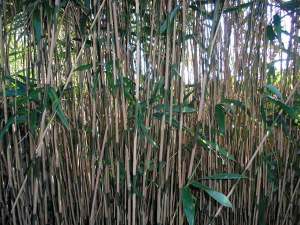 My biggest mistake was the bamboo (Pseudosasa Japonica), intended to screen the ramshackle shed in a Zen Buddhist kinda way and thereby create a secret hidden bolthole where I could do unspecific, vaguely creative things. How was I to know that the only plant in Hiroshima to survive the atomic bomb could reach such towering heights, dismantle a shed, drill through concrete, tear down party walls and send its roots motoring underground down the length of the street? And all in such a short time too! Put it this way, I’ve got so much bastard bamboo I could keep a pair of particularly pernickity pandas.

BAMBOO FOR SALE! £2 per bundle of 10 canes. Hurry while stocks last!

Delivery charge not included. Delivery outside Cardiff extra. No responsibility or liability taken for any accident or injury directly or indirectly caused by this product. Not suitable for small children, the elderly and the immune compromised. The value of bamboo can go down as well as up. Quality and durability of the canes not guaranteed. The sale of this bamboo should not be interpreted as either condoning or condemning sado-masochistic practices (other sexual fetishes are available). It is illegal to import pandas as they are an endangered species. By agreeing to purchase the bamboo the buyer cedes all future income to Dic Mortimer. Terms & Conditions on request.

There’s worse: the bamboo is so tall, dense and overwhelming it blocks out the very sunlight that drew me to this hovel in the first place. Those roses have had to grow 10ft tall to compensate and the hydrangea has tried to keep up with brobdingnagian (look it up, I had to) growth, while the “Queen of the Herbaceous Border” sulks in permanent gloom and that poor Fuchsia, only just recovering from the severe winter of two years ago, audibly wails for its quotient of Vitamin D. Everything else has had to become gigantic to survive, I spend hours daily hacking through the thickets with a machete, and I’m putting out 10 white bags of garden waste for collection every fortnight. Such incompetence with my own garden will make this hard to believe, but for many years now my “proper job” (ie: sometimes people have actually paid me) has been as a gardener!

Ok, most of my clients have been pensioners wanting little more than their begonias dead-headed, and what little work that comes my way is usually spent chain-drinking tea around kitchen tables waiting for the drizzle to stop. As with my writing “career”, I’ve never had a clue how to monetise my efforts, so earnings have always been negligible and I often end up working for nothing or being paid “in kind” (a pouch of baccy, a bottle of wine, a home-made sponge cake, a line of cocaine, that sort of thing). While none of this has kept the wolf from the door, at least the lupine beast is currently content to slumber in the hall – and that’s entirely thanks to my partner’s earnings. If we relied on my income we’d be repossessed within three months and I’d be kipping in a shop doorway. Yes, I’m a kept man! It’s a minor miracle that I’ve managed to keep going like this for decades on the back of an airy promise that one day my ship would come in, my magnum opus would be published and we’d live happily ever after…

As for the bamboo, it’s got to go. The paeony tells me so. The house sparrows like the shelter, the frogs enjoy the shade. But the rest of us crave the sun’s sweet warmth before the days begin to fade.