There isn’t much that can be had for free in Cardiff, where profiteering for private gain is holy writ, so I always snaffle the late summer gift of blackberries with relish. The blackberry is a native plant in Wales, so abundant in all terrains that its name in Welsh – mwyaren (plural: mwyar) – comes from mwy, meaning “more”. It is particularly well suited to the neutral silts and mild climate of Cardiff’s coastal plain, and thus it was to the last surviving scrap of the once extensive East Moors that I made my way this month to garner my annual harvest.

Within sight of the Pengam Tesco, where supine saps are fleeced at £4 per punnet for a handful of US-grown berries, I filled a sack with enough luscious, lustrous, jet-black fruit to make a large blackberry & apple pie, a Monmouth pudding and a blackberry trifle out of them – and still have enough left over to fill two freezer bags. I know what you’re thinking: 1) He must be some kind of morbidly obese diabetic, and 2) What the fuck’s a Monmouth pudding? Well, sure, I’ve a sweet tooth; but my innate skinniness has kept me lightweight, barring a modest Brains bitter beer-belly (which only manifests itself when I exhale anyhow), and I’ve had nothing amputated yet so can’t be diabetic. As for Monmouth Pudding, Pwdin Mynwy, it’s an ancient treat utilising that perennial standby of the Welsh kitchen: breadcrumbs, the poor woman’s polenta. Ok, ok, I hear the clamour over the blogosphere, here’s the recipe.

This blackberry bounty is not easy to access, since every effort is made to deter people from exploring Cardiff’s last remnant of moorland, a wild and lonesome place loomed over by the gigantic, groaning and clanking, dirty blue edifice of Celsa Steel’s Tremorfa Melt Shop – the final vestige of Cardiff’s once-important steel industry, now reduced to melting down and recycling the world’s scrap. I got there by walking through a deserted Tremorfa Park, Cardiff’s least known and most atmospheric green space, then turning south down a long, straight avenue of cherry trees towards the distant, enticing open moors. Under big, liquid skies, I roamed the bleakly beautiful tangle of bullrush, teasle, gorse and bramble for a couple of hours. While my trug slowly filled and the berry juices progressively turned my fingers black, the only other mammal I spotted was a manky pony who ignored my attempt to strike up a conversation and carried on grazing – a reaction strikingly similar to the one I get from the mammals in my local pub. 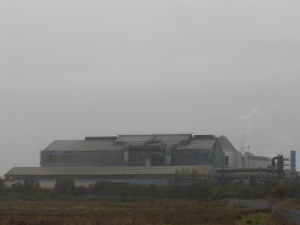 Hunkering down in a stand of willows to roll a fag, I had time to contemplate my surroundings. These moors in their natural state were Severn estuary tidefields and salt marshes, a watery world of creeks and muds teeming with fish and birds. Sea walls and drainage schemes began to claim the ground for human use from as early as pre-Roman times before agriculture took over for a couple of millennia, the fertile alluvia supporting rich pastures ideal for cattle and sheep. The East Moors were a source of the distinctive salty, crumbly Glamorgan cheese, the distant ancestor of Caerffili cheese, and remained virtually uninhabited bar the Welsh-speaking households of Pengam and Splott Isaf farms until industrialisation began in the mid 19th century. Massive dock and railway civil engineering works then engulfed the area at breakneck speed, spreading remorselessly eastwards from the mouth of the Taff towards the mouth of the Rhymni. The opening of the Dowlais Iron Works in 1891 brought heavy-duty pollution and Splott’s massed ranks of artisan terraced housing and, after a lull for world war, the Tremorfa estate followed in the 1920s and Pengam airport took the last substantial section of moor in 1931. The fragment left over was earmarked for industrial use, but the only major employer to take the bribe, I mean to be attracted by the financial incentives, were Rover cars. Their parts factory operated for a mere 15 years before being closed in the 1970s. This pointless short-term scam concreted over another chunk of moor (today occupied by Tesco) and continued a pattern of find it/fuck it up/forget it that had been set earlier by the airport (closed 1954 when Rhoose opened) and the Dowlais works (closed 1978 with the direct loss of 4,000 jobs as well as Splott’s reason for being). The one lasting  legacy left is Rover Way, a dust-choked lorry route bending along the coast which entirely severs the age-old connection between the East Moors and the Severn and is the UK’s only highway named after a defunct car brand.

The fragment that hangs on will not be here for much longer. Rover Way will eventually be turned into a 4-lane trunk road to fill the long-planned missing link in the A4232 between the Butetown Tunnel and Southern Way; Celsa have designs on more land to dump waste; and the execrable mock-executive abominations of ‘Pengam Green’ will surely take anything left over. Then the East Moors, and those fruit-thronged bushes of defiant mwyar, will finally be no more.