Deep yet accessible, melancholy yet life-affirming, metaphysical yet clinical, his astonishingly prolific poetic archive is going to stand the test of time. And when considering his prose, it is no exaggeration to now crown him as Cardiff’s greatest literary figure since the invention of the printing press. No other Cardiff writer has ever come close to defining an entire era in the city as Abse did so evocatively in his bitter-sweet recollections of inter-war Cardiff: scuffed kneecaps in dusty Roath lanes; the smell of woodbines and sweat on the cloth-capped Bob Bank; the easy assimilation of Jews into friendly, argumentative, engaged Cardiff communities; what’s been lost, what we should strive to keep. He was struck by tragedy late in life when his wife since 1951, the outstanding art historian Joan Mercer (1926-2005) died in a car crash on the M4 when they were returning to his Aberogwr seaside sanctuary after a poetry reading in Porthcawl. But, typically, even in these circumstances he drew courage and breadth from the experience and shared his grief with plangent wisdom in The Presence, an astonishing prose peak published when he was 85. 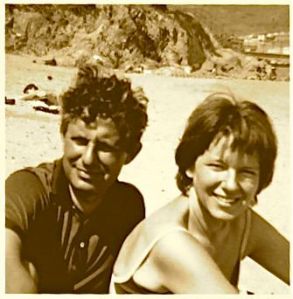 Beyond the world of literature, Dannie Abse’s death marks the final passing of a strand of secular, intellectual, socialist Jewry that was so integral to Cardiff life in the 20th century. It was a tradition that nurtured, amongst others, Maurice Orbach (1902-1979), Maurice Edelman (1911-1975) and Bernice Rubens (1923-2004), as well as Dannie’s equally high-achieving but very different brothers, the important psychoanalyst Wilfred Abse (1914-2005) and the maverick, free-thinking Labour MP Leo Abse (1917-2008). In the 1930s there were over 4,000 Jews in Cardiff; today there are fewer than 500. The ancestors of the few wanderers who settled in Wales from the vast diaspora fleeing pogroms in the 19th century went on to make a contribution across all spheres of Welsh life out of all proportion to their numbers; but they in turn were ultimately uprooted again by the industrial-scale anti-semitic genocide of the 20th century allied to the failure of Wales to break free from colonial bonds and forge the viable economy that might retain the talented and the creative. Loyalties and identities shifted both because of the State of Israel and because of the state of Wales. The loss was all ours. As the emerging horrors of the holocaust sunk into his consciousness, Dannie Abse was one of the first to grasp the sea-change. Casting his mind back to Roath Park in the war-torn autumn of 1942 at the conclusion of his 1954 memoir Ash on a Young Man’s Sleeve, he remembered:

I stood up and walked out of the park, crossing the brook over the toy bridge, only stopping when I reached the street to gaze back at the distant summerhouse, at the nearer tall trees, at one more leaf, like a coloured minute, poised between high branch and grass – and I heard not one lingering cry of a child playing in that park which was made for children. I lit a cigarette, turned up the collar of my mackintosh, and strolled home that was never to be home again.