Whoever comes to power after the Welsh elections on May 5th will face the daunting challenge of coping with a 25% cut in the block grant to Wales from London, a grant that was already woefully inadequate.  The new government will be searching for ways to make cuts that do the least harm to Welsh society.  To assist them, I have a simple suggestion that will instantly save the Assembly a very useful £25 million every year (at today’s prices), on into perpetuity.  It can be implemented immediately, the savings start from day one, and what’s even better this is a cut that will bring nothing but benefit.  Pay attention Carwyn Jones, Ieuan Wyn Jones, Kirsty Williams and Nick Bourne, here’s a surefire vote-winner…roll of drums…wait for it…brace yourselves: Disimpound Cardiff Bay. 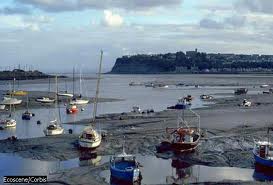 Cardiff unbarraged had to go: Nicholas Edwards said so

Of all the many environmental crimes committed against Cardiff the building of the barrage stands supreme.  This was an act of wilful vandalism dreamed up on the back of an envelope by an unelected Tory that destroyed a world-class, designated Site of Special Scientific Interest for no better reason than Welsh Secretary Nicholas Edwards (now Baron Crickhowell) preferred a freshwater lake to a tidal estuary on aesthetic grounds.  That’s it: the only example ever of an internationally important and legally protected environment being eliminated because it didn’t look right!

The impounding of the waters of the rivers Taff and Ely behind a £500 million concrete dam obliterated the nutrient-rich mudflats and salt marshes that were vital feeding grounds for huge flocks of migrant wading birds, blocked off the ocean which twice a day since the beginnings of human history had surged across the flats and up the rivers to form an irreplaceable inter-tidal natural habitat of unique specific salinity, and foisted on Cardiff an alien freshwater lake (the 18th largest in Wales – it still hasn’t been given a name) with entirely unknown and unforeseeable environmental consequences.  A decade has passed since final impoundment in 2001, and we are now beginning to see some of those consequences.

The stagnant 500 acre lake is deemed so risky an environment and so dangerous a bio-hazard that the Harbour Authority is compelled to continually monitor, police and adjust every aspect of its behaviour.  Under no circumstances is anyone permitted to swim in the blue-dyed waters without protective clothing, and accidental ingestion of any water is enough cause for a trip to A&E.  Computerised buoys analyse the water’s temperature, conductivity, acidity, turbidity, salinity and oxygen levels round the clock.  630 diffusers are pumping permanently to artificially aerate the water lest oxygen starvation kills every living creature within.  Even that isn’t sufficient during sustained high temperatures, so a mobile oxygenation barge has to endlessly circle the bay and  pump in oxygen direct.  Also needed on permanent stand-by is the ‘water witch’, a purpose-built craft designed to scoop up the 1000 tonne per year of litter and debris which used to flow out to sea to end up as beach flotsam and jetsam but now is trapped in the lake, bobbing on the surface or sinking to the depths.   Accumulated algal scum, thriving in the excess nitrogen and phosphorous, must be constantly skimmed off to prevent lethal plankton blooms.  Sediment that once drifted out to sea now piles up in the bay, requiring perpetual dredging and dumping operations to stop the lake becoming a shallow swamp.  High-intensity lamps burn through the summer to try to draw away the swarms of midges that find the fetid, flat bacterial soup precisely to their liking.   Poison bait-boxes garland the water edge to trap the rats busy spreading Weil’s disease in the warm, filthy water they love.  Industrial quantities of herbicide drench the shoreline to hold back the rampant colonies of knotweed and hogweed.  Unpredicted  bio-invasions trigger state-of-emergency running battles against non-native aliens like the Zebra Mussels breeding uncontrollably, devouring insatiably, clogging up the aerators damaging vessels and necessitating boats being rinsed with bleach for an hour before they can move to other waters, or the indestructible ‘killer shrimp’ Dikerogammarus Villosus that has reached epidemic levels in the increasingly scary waters.

Then there are the 230 monitoring boreholes, eight wells with submersible pumps, four horizontal collector drains, four field drains and numerous associated outfalls toiling away day and night to ensure that over 20,000 properties in south Cardiff don’t get the sort of rising damp that would tear a house down.  The monumental folly of creating a trapped body of water on a sea-level flood plain has raised groundwater to unsustainable levels by blocking underground flows.  The criminal conspiracy that was known as the Cardiff Bay Development Corporation (CBDC) grudgingly conceded 20 years’ protection to Cardiff during the all-time record eight years in which the Cardiff Bay Barrage Bill crawled through the UK parliament (this protection, incidentally, expires at midnight on 3/11/2019).  Residents of Butetown, Grangetown and Riverside had better hope those pumps keep pumping in eight years’ time. or else they will be inhabiting a bog.

Without all these complex efforts the lake would rapidly become a liquid hell.  The maintenance costs add up to £25 million a year, rising steadily, for ever more, with no respite.  That bill is paid by the Welsh Assembly out of its modest budget, a poison chalice handed on after the CBDC was wound up.  What few benefits the barrage has brought have not accrued to the people of Cardiff, let alone Wales, but only to the pension funds, property speculators and leisure chains who saw their land values soar as they sung in unison from the “Europe’s most exciting waterfront” hymn sheet – until falling strangely silent when their tawdry, half-empty apartment blocks suffered the biggest price drops in the UK.   But even if all the propaganda and hype were true, the sheer scale of the ecological assault means that the barrage will never be worth it.

Something is very, very wrong here – and in our hearts all Cardiffians know it.  To separate the city from the wide oceans where its coal ships once navigated, to never again taste the brine in the air on Canton Bridge as the Atlantic tides creep up the Taff, to evict the dunlins and the redshanks from their ancient grounds, to turn vibrant, moody rivers into castrated, regulated drains, to crush the wild, contrary, intriguing places – these are immeasurable losses that have deeply scarred the Cardiff psyche.  And all for what? So that absurd social-climbers can prance about in their deck shoes playing Admiral of the Fleet on a mill pond?  So that coach parties of pensioners can guzzle their knickerbockerglories in a waterscape? So that sensitive yuppie retinas are not sullied by a glimpse of mud?  And just to rub in the scarcely believable barbarism of the whole project, the huge forces surging through the barrage locks were not even harnessed to produce green electricity – the only reason tidal barrages are built the whole world over, except in Cardiff.

People who want the world to be an ordered, sterile theme park given over to human profligacy love it, but the creatures that once foraged here have not been so easily persuaded.  The number of salmon and trout swimming through the fish-pass declines each year – they cannot detect the smell of their home rivers and now go elsewhere.  The alternative feeding grounds on the Gwent Levels, thrown in as a sop to silence the RSPB, have proved no substitute for the delicately balanced Taff/Ely estuarine habitat – the wading birds dipped their beaks one last time, rejected the offer, and will never be seen around south-east Wales again.  Did I say “never”?  That’s too pessimistic.  Tucked away in the small print of the Barrage Act are clauses which allow disimpoundment to be ordered at any time should the environment become untenable or the running-costs unpayable.  The barrage was engineered to last 200 years; the campaign to reduce the lifespan of this monument to greed and stupidity begins here. 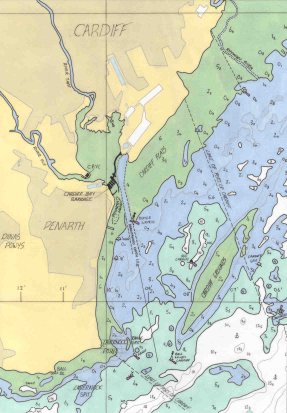