The 19th Welsh Premier League season has now concluded.  Bangor City won the title for a 3rd time following a 16-year gap, pipping The New Saints by 2 points after beating them 1-0 at Farrar Road in the decisive final match (the champions receive £15,000, the smallest prize-pot of any national league in the world). TNS thus failed to win a 6th championship and had to settle for  runners-up spot for a 5th time; their consolation was the League Cup (prize £10,000), which they won for the 3rd time in a row and the 5th time in total, taking them above Barry for all-time wins.   In the Welsh Cup, Llanelli triumphed for the first time ever in their 3rd final, beating 16-time finalists Bangor and so denying them a 10th Welsh Cup, a 4th consecutive victory and the league/cup ‘double’.  Neath, who had finished 3rd anyhow, clinched the last European place by beating Prestatyn Town in the Europa League play-off final.  Haverfordwest County’s unbroken 14-year stint in the league ended with the wooden spoon and relegation, but 2nd-last Bala Town were spared relegation by the failure of Cymru Alliance champions Connah’s Quay or runners-up Rhyl to satisfy the requirements of the domestic licence needed for WPL membership, meaning no club goes up from the northern feeder.   Bryntirion Athletic won the Welsh League (the WPL’s southern feeder), continuing the Bridgend club’s remarkable rise up the pyramid (they were at level 5 as recently as 2002), but they are another club that must tread water as they cannot currently achieve a domestic licence.  At least runners-up Afan Lido do meet the strict criteria, and they will return to the WPL after a 6-year absence.  This is the 10th time in WPL history that a club due for relegation has avoided it because of a shortage of eligible clubs for promotion – a situation unheard of in any other national league. 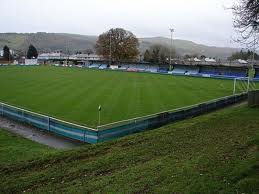 So in 2011/12 Bangor will represent Wales in the Champions League and TNS, Llanelli and Neath in the Europa League.  For City this will be a 15th European campaign, but their first ever in the European Cup/Champions League, allowing them to join a select group of clubs that have played in every UEFA competition (European Cup/UEFA Cup/Cup Winners’ Cup/Europa League/Intertoto Cup).  TNS embark on a 13th European adventure, and their 12th in consecutive seasons, while Llanelli have also become experienced European perennials – the Reds will take part for a 6th consecutive time.  Their excellent overall record (P 12, W 4, D 2, L 6; already superior to that of Swansea City when they represented Wales – P 18, W 3, D 4, L 11) means a higher UEFA coefficient and a bye until round 2 of the Europa League.  Neath will make their European debut, an extraordinary development for this archetypal Welsh rugby town. The WRU’s failed regional structure may have destroyed Welsh club rugby but it’s been of assistance to Welsh club football, Neath being the most significant beneficiaries; playing at Neath RFC’s European-compliant Gnoll in the iconic all-black strip of the once famed “Welsh All Blacks”.

Overall, the new 12-club format, split conferences and play-offs, although tricky to get your head around initially, proved to be that extreme rarity: an FAW success.  The average gate rose by a record 25% to an all-time high of 343.  Yes, that is infinitesimal (only the Estonian league has a smaller average in Europe), but considering the absence, for one reason or another, of many of the big-town clubs (Barry, Rhyl, Cwmbran, Bridgend, Caernarfon, Llandudno, etc) this is an encouraging improvement, making the bare-minimum average of 500 feasible quite soon.  The pruning of the league did eliminate a lot of the cricket-score thrashings traditionally dished out to the weaker teams and allowed the current four best teams in the Welsh pyramid to take the European places.

Of course the FAW wouldn’t be the FAW if that cabal of time-servers and gravy-train riders didn’t regularly fuck up on a gigantic scale.  Their latest incomprehensible brainwave is to “invite” the six clubs that play in the English pyramid back into the Welsh Cup.  They have tried similar schemes to shoe-horn these treacherous clubs into Wales’ precious European slots before – for reasons nobody understands.  Wales only has entitlement to these European places because of the existence of the very Welsh pyramid these clubs actively work to weaken and ultimately eradicate.  This is akin to cutting a special set of keys to the convent dormitory for a pack of serial rapists.  Perhaps the FAW are stupid enough to believe that Cardiff City et al would surrender entry to the highly lucrative English FA Cup (which they would have to do, as no club is allowed two different national routes into Europe simultaneously) for the sake of the paltry Welsh Cup winnings of £30,000 (Manchester City just banked £10 million from their Cup run) and the slight chance of representing, sniff, Wales in a few European games.  But this will not happen, for the simple reason that these six clubs are Welsh alright, but on one condition: you pay them.  You would have thought the FAW might have grasped that by now.