Note: In this post the word ‘rat’ is not a metaphor for cad, cheat, nark, traitor or general bastard, of which there are plenty in Cardiff – well, not explicitly anyway.

I have seen a rat in broad daylight on four separate occasions in Cardiff recently. One was scuttling along the pavement near Ali Baba’s food emporium on the Clifton Street/Iron Street corner; one was actually using the zebra crossing as it hurried across Splott Road from the Methodist chapel towards the chippy; one was brazenly foraging in and out of litter-entangled neglected shrubberies on Tyndall Street; and one was casually trotting along the grass verge between Taffs Mead Embankment and the riverbank. It could be just coincidence – after all, they do say we’re never more than six feet away from a rat – or it could be a sign, a portent even, of something else…

These rats were brown rats (Rattus norvegicus), the most common rat in the world. Being opportunistic, scavenging omnivores, they thrive wherever messy, dirty, wasteful humans gather, which is everywhere in the world bar Antarctica. There are an estimated 12 million brown rats in the UK alone. Humans have long branded rats as ‘vermin’, demonised them as vicious, disease-spreading pests, and considered it perfectly acceptable to slaughter them in bulk by any means necessary. This rattophobia (‘musophobia’ is the word for the commonplace fear of rats and their smaller relatives mice, but I’m partial to a new coinage) dates back to the 13th and 14th centuries when rats were blamed for spreading the ‘Black Death’ that killed an estimated 50 million people, including 60% of the European population. The fact that it was fleas not rats that spread the plague cut no ice with stubborn human ignorance once the prejudice was implanted and then culturally entrenched by tales, fables and myths, such as the hugely influential rat legend from Germany, The Pied Piper of Hamelin. The story of the rat-catcher getting revenge for not being paid by luring away the Lower Saxony town’s children with his magic pipe has gone global over the last 700 years, with many different versions from sources as diverse as cultural giants Johann Goethe (1749-1832), the Brothers Grimm, Jacob (1785-1863) and Wilhelm (1786-1859), Robert Browning (1812-1889) and Crispian St. Peters (1939-2010)…Who? Indulge me with this:

Looked at with contemporary eyes, the allegorical figure of the Pied Piper is of course no longer anything to do with rats but much more a symbol of the creepy child-catcher, conning the gullible within plain sight disguised as an entertaining eccentric until it’s too late – examples like Charles Windsor’s close friend and confidant Sir Jimmy Savile OBE KCSG (1926-2011) or ‘King of Pop’ Michael Jackson (1958-2009) spring to mind. However, the rat revulsion remains – even though, like so many cherished human notions, it’s a load of illogical nonsense. Rats are actually timid, harmless, intelligent, scrupulously clean and intrinsically sociable, confirmed by the growing popularity of tame ‘fancy’ rats as friendly, playful, low-maintenance domestic pets. In any case, it’s epic insolence and hypocrisy for human beings, of all species, to deprecate a fellow mammal for being ‘dirty’ when it is humans who have trashed the whole planet to such an extent that immeasurable amounts of microscopic plastic are now found everywhere from Snowdonia mountain streams to deep ocean trenches, it is humans whose filthy detritus girdles the globe from pole to pole, it is humans who have turned the air we breathe into toxic poison, it is humans who are busily hell bent on super-heating the atmosphere with fossil fuels until the entire Earth is uninhabitable, and it is human numbers that have grown to staggering levels that can truly be labelled a dangerous “infestation”. Rats, by comparison, are positively wise, benign and beneficial, the ultimate recyclers heroically striving to clean up our dreadful dregs and vile vandalism.

In Cardiff’s case, extrapolating from the UK figure, I calculate that there are roughly 30,000 brown rats living in the city. Given the extraordinary levels of rubbish that clog every Cardiff nook and cranny, thanks to a combination of a local economy devoted to throwaway consumerism, a local council that has pared public services to the bone and a local population congenitally habituated to living in a shit-tip, it is therefore hardly surprising that rats are increasingly visible. Ostensibly nocturnal, they are reacting congruently with trademark rat-like acuity to the 24-hour city and emerging from their usual haunts – sewers, drains, waterways, trees, roof spaces, burrows and hidden nests – to strut their stuff openly, secure in the knowledge that their main systematic predators – owls, snakes and weasels – have long been banished from these parts.

I’m delighted to come across these rats, if only as a sign that there’s still a place for animals other than humans in Cardiff. In viewing the rat as admirable rather than an enemy to be exterminated or an object to be cruelly tortured for petty human convenience in laboratories, I’m very much in the minority. However, this puts me in select company: brilliant Scot Kenneth Grahame (1859-1932), for instance, made Ratty a brainy and brave anthropomorphised hero in The Wind in the Willows, arguably the greatest English-language children’s novel of all time. 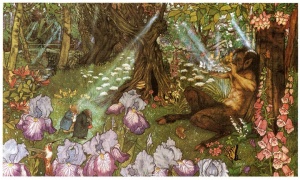 Ratty and Mole meet The Piper at the Gates of Dawn

Usually though the rat is the villain: even major writers as talented and perceptive as George Orwell (1903-1950) in Nineteen Eighty-Four and Edgar Allan Poe (1809-1849) in The Pit and the Pendulum lazily utilised cliché rats to evoke terror. Not having been stigmatised like the rat despite being almost identical biologically in all regards, the mouse (Mus musculus) has by contrast got off lightly, Mickey Mouse being the very epitome of a flattering anthropomorphism. This merely illustrates two abiding human weaknesses: dumb irrationality and an embarrassing obsession with size.

The Welsh words for rat and mouse are essentially the same: llygoden fawr (big) and llygoden fach (little), derived from llyg meaning shrew. Interestingly, this shows that the Welsh language had pinned down size as the only difference between the two 1,000 years before the lab-rats of taxonomy, biology and genetics came to the same conclusion. More in hope than real expectation, I like to think this also shows we aren’t knee-jerk anti-rat fanatics and would always treat them kindly – after all, we may be eating them soon… 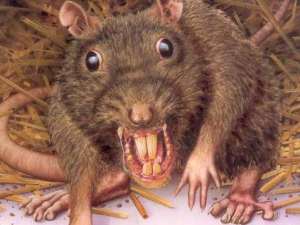