Walk in the centre of Cardiff and you walk through an environment shaped by giant, anonymous corporations. Our public realm has been privatised and organised according to the requirements of the transnational mega-rich, while our politicians and media, both owned neck and crop by this elite, assure us there is no alternative and bend over backwards to assist the further enrichment of an infinitesimal few at the expense of the social sphere. In Cardiff the ugliness deep in the twisted core of the neo-con economic experiment inflicted on us for the last 30 years is made flesh in concrete, steel, glass and plastic. We are bludgeoned from all sides by the like-it-or-lump-it sensory muggings of commerce; the pushy, insistent hoardings, billboards, brandings and slogans, the preening, garish brothels of consumerism, the vacuum-pumped erections of Big Business, the dilettante veneers of cheapskate post-modernism and the infantile imagery of the live-now-pay-later retail racket. And just in case anyone deluded themself Cardiff still had a place for idiosyncracy, spontaneity and unmanipulated interaction, the Council stuck up a huge TV screen overlooking Hayes Island in 2010, leaving it switched on at full volume to the banal Brit blather of the BBC – extremely bad manners, but meeting the approval of sugar-crazed small children with ADHD. On top of this visual assault we are choked by exhaust fumes, pummelled by noise, enveloped in the stench of industrial food, spied on by batteries of roof-top cameras, scrutinised suspiciously by platoons of private security guards with roid-rage hangovers, sniffed at by the roaming drug squad’s hungry hounds, and ceaselessly controlled, marshalled and coralled into the gormless passivity global capitalism depends on to survive. All is monetised, all is an income stream, all is artificial. The Emperor doesn’t just have no clothes; he’s shat himself.

Where am I going with this?  I’ll tell you.

I spent much of last weekend at the 6th Roxe Jam festival of graffiti art in Sevenoaks Park*, Grangetown. There could not be a greater contrast with the red-meat capitalism going on ½ a mile away in town. At Roxe Jam very different principles apply: co-operation not competition, improvisation not habituation, intuition not indoctrination, originality not imitation, and giving freely not selling for profit. Along the entire length of the railway embankment that forms the Park’s eastern boundary, more than 40 local artists created vivid works from scratch over the weekend. As I chilled out on the grass in the warm July sun under scudding cumulus clouds chased by westerly breezes across a sapphire sky, I watched the monster wall (130m/425ft long by 9m/30ft high) gradually being transformed into a mind-bending feast of eye-candy.

A few deft strokes, a flick of the wrist, and another shape emerged. Moving like dancers up and down the wobbly scaffolding platforms, the painters wielded their spray-cans with sureness and purpose, making a daunting physical and mental task look easy. But easy it certainly isn’t to marshal colour, form, geometry and light and shade on such a large scale. The only limit is the creator’s imagination. Cultural references are mashed and reworked without pause, subtle optical illusions utilised without self-consciousness, and complex abstraction given precedence over simplistic representation without fear. The whole edifice of mainstream ‘Art’ is questioned and discarded: art as property, art as investment, art as advertising, art as flattery, art as propaganda, art as wallpaper, art in storage, art pickled in aspic, art hanging in a frame on a gallery wall. Nobody went to Art School, nobody is building a career, nobody’s getting paid. And by the Sunday evening a spectacular, delightful treat had been bestowed on Grangetown.

There are people in Cardiff who complain about graffiti. The same people are silent about the corporate graffiti that truly disfigures the city. They are so thoroughly brainwashed they can only cope with optical stimuli if dished out by John Lewis. You could say they are ignorant aerosols. People have been scratching their markings onto surfaces since prehistory; Neolithic nomads in caves, medieval monks on pews, prisoners on cell walls. What is this blog if isn’t me saying “I woz ‘ere”? What are the Sistine Chapel frescos if not graffiti? It’s what those who want to put something into the world that wasn’t there before have always done. And graffiti often achieves a potency “professional” art would die for: who, of my generation familiar with old Newport, was not moved by the spine-tingling scrawl WELCOME HOME ARTHUR POW that could still be seen into the 1970s on a crumbling wall on the west bank of the Usk long after Arthur, presumably, had returned safely from his Japanese prisoner-of-war camp?

Graffiti has been under attack from those who don’t want to hear the voiceless and don’t want to see the ignored ever since its modern manifestations first emerged via black kids on the New York subway system in the 1970s. In Cardiff the pioneer was Kevin ‘Skroez’ McDonald in the 1980s. The bright, the sharp, the independent-minded, the nonconformist and the rebellious – in other words, the best of Welsh youth – were inspired to get involved and from those early days a thriving subculture has grown, overlapping with hip-hop and breakdance, and packed with unheralded talent that doesn’t fit the UK’s prevailing commercial straightjacket. Think of the excitement: slipping across the night-time city with your can, leaving your personalised tag on the tempting blank canvases of office, hotel or shop, outwitting the cops, making your presence felt in the indifferent urban acres, sending coded communications to your comrades, and then moving on, down the back lanes, short-cuts and by-ways of your intimately-known home town. This is a life worth living.

Noting the impact of Bristol’s Banksy in the 1990s, the authorities twigged that treating graffiti as vandalism to be instantly power-washed away wasn’t as popular as they had thought. “Legal” walls began to be allowed in designated locations, usually tucked away out of sight, out of mind so as not to alarm the anally-retentive. Cardiff’s outstanding gallery of graffiti art was permitted on the rear walls of the Amadeus factory, Andrews Road warehouses and Station Road garages at the southern end of Hailey Park, Llandaff North, alongside a pathway that covers the exact course of the old Glamorganshire Canal. But this wall will soon be no more: the buildings are to be demolished for housing. That will leave just two “legal” walls in Cardiff:  Elm Street Lane, between Elm Street and Partridge Road in Roath, and the wall at Sevenoaks Park.

“Roxe” (pronounced ‘roaks’ not ‘rocks’ or ‘roxy’) was the tag of Canton lad Bill Lockwood (1992-2007), a livewire free spirit who died in a road accident. Out of this tragedy his mother, my darling friend Lou Lockwood, started the Roxe Jam as memorial and tribute to Bill, working miracles in complicated dealings with the Assembly, the Council and Network Rail. For Bill’s sake, for Lou’s sake, and for the sake of all the untapped potential, unrecognised skill and unrealised dreams of Cardiff kids, may the Jam never end, may the wall keep mutating, may our city be reclaimed, may our broken hearts be mended.

Having decided to conquer my aversion to anything more techno than a hand-whisk, I took my digital camera to Sevenoaks Park and managed to get it to work. So, here are this blog’s first photos not nicked off the internet. As I get the hang of it there will be a lot more in future. Also included below is a photo of yours truly as some readers seem to want to know what I look like. If you see me around a) don’t hit me, and b) my answer to the question “Can I buy you a drink?” is always “yes”. 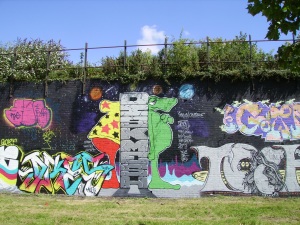 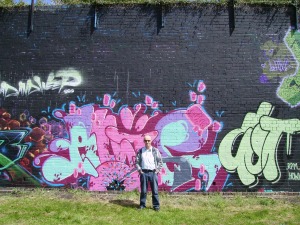 * NOTE
Sevenoaks Park, a remnant of Cardiff’s once extensive West Moors, was first named Gillard’s Field (the horses of the long-gone Gillard carriage company of Dorset Street grazed there). Later it became known as ‘the Tan’ after the David & Sloper Tannery that once stood on the other side of Sloper Road. Laid out in 1900 when the heavyweight mock-Tudor Ninian Park School was built on the Virgil Street corner, the Park’s eponymous seven oaks were felled in the 1950s. It is the home ground of Grange Albion baseball team, the all-conquering ‘black & whites’ in the only team sport where Wales is the world champion. The railway line here was constructed as the Penarth Railway in 1859 to freight coal down from the valleys, running between a junction with the Taff Vale Railway at Radyr and the Ely Tidal Harbour (extended to Penarth Dock in 1865). Huge storage sidings for the coal wagons were removed in the 1980s and replaced by the housing of nearby Powderham Drive.