Pandemic fall-out is likely to mean that a lot of the pubs ‘temporarily’ closed during lockdown will never open again. The random, spontaneous social mixing intrinsic to a public house is particularly unsuited to the seismic change of instinctive social distancing, so rapidly accepted and entrenched it seems irreversible. Many habitual regulars have kicked the pub habit, discovered they don’t miss it at all and will not return. Moreover no pub with modest profit margins or cramped premises will be deemed worth the expense of the major structural, design and equipment alterations required to re-open with an unviable reduced capacity. On top of this, debt-strapped Brains has announced it intends to sell off 40 of its 160 pubs, including at least 20 in Cardiff. The brewer has yet to divulge the hit-list and rumours are rife in the city, but what’s certain is that a huge tranche of Cardiff pubs will soon be lost. With that in mind, I’d better crack on with an odds and sods pubocalypse catch-up to clear the decks in preparation for the imminent…um…will ‘pubageddon’ do?

THE BULLDOG
Plasmawr Road
I should have covered the Bulldog previously, since the erstwhile Fairwater Rugby Club HQ actually shut for good in 2016. No excuses, it’s probably simply because I so rarely venture out to Cardiff’s exotic western city limits. Anyhow, after standing empty for three years the drably functional 1960s building has been demolished and replaced by “affordable” flats. Brains, having lumbered it with its repellently British name, tried and failed to make it a going concern after the Rugby Club got into financial difficulties. But there was no getting around the scary zombification of the masses into passive, sedated, couch-potatoes binge-watching American trash while flatulating into their cargo pants; the Bulldog had to be put down.

CROCKERTON
Greyfriars Road
I missed this one too. Who cares? It was a Wetherspoon. Shut in 2017. The number of ‘Spoons in Cardiff is down to eight. I knew it as Crock o’ Shit.

MISSOULA
St Mary Street
The 1866 Royal Hotel was the earliest building in St Mary Street to exhibit Big City bulk and clout, a multi-fenestrated four-storey Italian Renaissance showstopper designed by English architect Charles Bernard (1800-1899) – who went on to endow Cardiff with an even finer building, the elegant Venetian palazzo-style Queens Chambers of 1878 on Queen Street. The Royal was Cardiff’s prestige hotel for decades but steadily fell into crumbling decrepitude in the 20th century before a complete refurbishment in 2001. This entailed converting the ground floor, accessed by the hotel’s old entrance, into a large drinking factory for weekend clubbers (i.e. twentysomethings from the sticks intent on snorting powders and getting laid). First it was called Edwards and then Lakota before pub buy-out specialists Stonegate snapped it up and turned it into Missoula in 2011. It was all to no avail; Missoula remained a mediocre, downmarket meat-rack and was summarily shut in 2019. Stonegate executives in Luton had a re-think, shipped in the refit team and re-opened it as another one of their crummy ‘brands’: a Slug and Lettuce. Oh, mercy! Luckily, the collapse of Cardiff’s ‘hospitality’ sector on top of the inexorable decline of the overcooked and worn out night-time economy means it shouldn’t be around for too long either.

PENGAM MOORS SOCIAL CLUB
Seawall Road
I don’t usually include clubs in Pubocalypse – what do you think I am, a glutton for punishment? – but I will make an exception for ‘the Shed’, an elemental Cardiff hostelry if ever there was one. The jerry-built, corrugated iron shack tucked away on grippingly gruesome Seawall Road was a rough-and-ready refuge for a couple of generations of Tremorfa topers – until its licence was revoked in 2019 after police objections, on the grounds of “violence, disorder, drug use and inappropriate sexual activity”. What a fuss! Isn’t that just an average evening in the Royal Lodge Windsor? 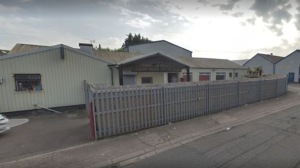 The Shed has been shed

THE THREE BREWERS
Colchester Avenue
Opened in 1966 by Bass Charrington, at the time the largest UK brewing company, the Three Brewers was presumably hoping to entice the thwarted thirsty of publess Penylan, skiving students from the Cardiff College of Food Technology just opened on the other side of the road and the oil-smeared workers in the surrounding Colchester Factory Estate. But Penylan’s pensioners preferred to drain the cut-glass decanter at home rather than set foot in the brand new building – a shocking mess of cheapskate materials and slapdash architecture under a staggeringly ugly flat roof – and students had far better things to do than sit around in pubs until at least the 1980s (pubs were for old men playing shove ha’penny, hen-pecked husbands, cock-pecked wives, bar-stool bigots, hale-fellow-well-met buffoons, mainstream morons and incorrigible alcoholics; we preferred to lounge around on bean bags in private houses spaced out on mind-bending drugs). In any case the College, which became part of South Glamorgan Institute of Higher Education in 1976, changed name to Cardiff Institute of Higher Education in 1990 and morphed into UWIC in 1996 following the granting of university status, closed the Colchester Avenue campus altogether in 2010. As for the various industrial operations in the vicinity, their numbers remorselessly diminished over the years, starting with the closure of Roath Power Station in 1970 and continuing with the loss of manufacturing companies such as Fairholme (joinery, caravans, trailers), Livermore’s (engineering), Dialoy (piping, castings), Sanlinea (joinery, pallets), Industrial Precision (precision instruments), Wheeler’s (mechanical engineering), Elmatic (heating, electrical engineering), Western Plant (civil engineering) and Bruce’s (coachworks). By the 1990s the UK had completed the outsourcing of manufacturing to the cheap labour economies of Asia to become today’s parasitic, purposeless economy dependent entirely on profligate consumerism and the only workers left in the largely abandoned wasteland were a few panel-beaters and scrap-dealers. Without any sort of customer base, the Three Brewers seemed doomed: a theory confirmed when it was taken over by reliably awful chain Mitchells & Butlers in 2003 who then sold it in 2010, along with 332 other UK pubs, to Stonegate, a subsidiary of a private equity firm registered in the Cayman Islands. Having worked out that the land it stood on was worth more, Stonegate eventually shut the hopelessly unpopular dump in 2019. And, as night follows day, a planning application for a block of 50 “affordable” flats has duly been lodged with the council. Local LibDems are objecting; needless to say, their chances of success are incalculably slim.