I’m going to wade into the controversy that has raged since the publication in June of the Welsh government’s Independent Review of Support for Publishing and Literature in Wales. The Review was launched by the then business minister Edwina Hart in 2015 and announced just before the 2016 Assembly election by Ken Skates, at the time deputy minister for culture tourism & sport. It was conducted by a panel selected by Hart, who retired as Gower AM in 2016, consisting of chair Medwin Hughes (Vice-chancellor, University of Wales Trinity St David), vice-chair Elin Haf Gruffydd Jones (Director of Welsh and Professor of Media & Creative Industries, Aberystwyth University), John Williams (novelist and crime fiction reviewer for the Mail on Sunday), Philippa Davies (writer of self-help and motivational books), and Martin Rolph (a “consultant”). After 12 months they delivered a damning report that, amongst other things, recommended stripping Literature Wales of virtually all of its responsibilities and transferring them to the Welsh Books Council. Literature Wales, formerly Academi, is the national organisation responsible for developing and promoting literature and the Welsh Books Council is the national organisation responsible for supporting the publishing industry. Both are publicly funded, directly by the Welsh government or via the Arts Council of Wales. Right, that’s the sensible, dull stuff dispensed with, let’s get down to the fun: flinging a bucket of ordure over the lot of them!

Hardly had the report been published before Ken Skates, these days economy secretary in Carwyn Jones’ alarmingly dysfunctional Labour government, said he was “minded” to accept its recommendations. “Minded”?? Nobody uses that word  – except lightweight politicians trying far too hard to exhibit gravitas. Mr Skates, known as ‘Ken the teeth’ in the Wrecsam area, is beginning to look like a classic example of the ‘Peter Principle’ of management theory, formulated in the 1960s by Canadian educator Laurence Peter (1919-1990), which says that everyone rises to the level of their incompetence. Saying that, most mortals would be way out of their comfort zone dealing with the incestuous, back-scratching, members-only mutual appreciation society that is the Welsh literary establishment, and the economy secretary of the world’s smallest and most understaffed legislature has quite enough to deal with already without getting embroiled in that particular can of worms. My estimation of him rocketed last year when he spoke with refreshing honesty about his struggles with Generalised Anxiety Disorder, revealing qualities of vulnerability and perceptiveness hitherto concealed behind that robotic mask he feels obliged to adopt in the Senedd. 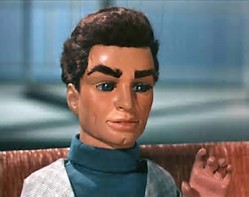 But this is what our infant Welsh democracy seems to do to everybody who enters its sunken chamber: drain any spontaneity, spunk and spark and replace it with a crushingly conformist respectability and subservience to the appalling status quo. This conservatism was built into the Assembly’s foundation by London governments – not for nothing was it named the ‘National Assembly for Wales’ rather than ‘of Wales’. Founding Presiding Officer Dafydd Elis-Thomas then entrenched the pussy-footing prissiness during his long tenure (elected on the Plaid ticket, these days he’s the ‘Independent’ AM for Dwyfor Meirionnydd and Labour’s minister for culture tourism & sport). And all the while the don’t-rock-the-boat banality has been stringently enforced by ranks of anonymous ‘special advisors’ and the sinister, be-suited agents of Britain implanted in the Wales Office, before whom Carwyn’s feeble team of hyper-sensitive pixies can only melt in fear. In this context Skates’ kneejerk reaction to the report – essentially “Yes Professor Hughes, whatever you say vice-chancellor” – was understandable. Unfortunately it quickly made him look a complete idiot because somebody then sat down and read the bloody thing and realised it was a load of incoherent, uncomprehending, incomprehensible twaddle. For a comprehensive critique of the report, see Gary Raymond’s superb demolition job on the Wales Arts Review website (link not operating).

So, someone had a word in his ear and Ken Skates has now done a complete somersault; he’s “unminded”, one might say. A spokesperson has trotted out regulation flimflam about ‘further review’, ‘consultation’ and ‘stakeholders’ and the report has been kicked into the long grass, where no doubt it will be left to quietly decompose. Yes, like so many of the Labour government’s half-arsed initiatives, it was all a complete waste of time, effort and money.

All that remains to ponder is the report’s inadvertent exposure of the deep rifts within Wales’ literary elite. Inevitably the overarching cause is nothing more interesting than that endemic Welsh disease: committee-itis, a tragic displacement activity common to all the jumped-up powerless. As the old joke goes: Why are there at least two chapels in every Welsh village? Answer: because then there’s always one you can refuse to ever set foot in again. Personality clashes, perceived indignities, petty jealousies, lingering vendettas and touchy egos are magnified out of all proportion to their importance in hermetically-sealed mini-universes like Welsh literature. In this gilded circle, the same infinitesimally small group of people only ever interact with each other and thereby they reinforce their self-importance, entrench the delusion that they are making a difference and saunter blithely into the trap of believing their own publicity. One can only surmise what small slights in the past prompted Medwin Hughes’ panel to off-load the chips on their shoulders at public expense, or what fine philosophical and political demarcation lines separate the warring factions. There are clues in the Professor’s CV. Amongst his many onerous duties he’s High Sheriff of Dyfed, an arcane ceremonial post hand-picked by English royalty, which means the sovereign endorses him and he endorses the sovereign. For me, it’s hard to decide which of those two facts a native Welsh-speaker from Llangefni should be more ashamed of, yet Hughes declares he’s proud of the ‘honour’. Good grief, someone tell the Prof the 16th century’s over! Wait a minute, I see he’s also a big cheese at the University of Wales Press (UWP), Wales’ largest indigenous publisher, issuing over 70 new titles a year. I withdraw everything I just wrote about him and would just like to say how fantastic my mate Medwin looks in a black velvet court-coat, breeches and buckled shoes. After all, I’m in the research phase of a planned heavy-duty academic history (subject matter still under wraps) and UWP would be my favoured publisher – I’m not stupid!

What about Literature Wales, then? The organisation is run by intelligent, cultured people with the best interests of Wales at heart, and is definitely not to blame for the fact that the only literature you’ll find in 90% of Welsh homes is the menu of the nearest Chinese takeaway. Literature Wales’ rootstock, Yr Academi Gymreig/The Welsh Academy, is a veritable who’s-who of the brightest and best literary talent in Wales, past, present and future, and is definitely not to blame for the fact that 90% of the Welsh population has never heard of any of them. Everybody is absolutely delightful and really nice – progressive, inclusive, tolerant, respectful, kind, gentle, supportive and did I mention nice already? Really, really nice. Oh, nearly forgot, and rich. They scare the living daylights out of me.