BUFFALO BAR
Windsor Place
In Cardiff’s dysfunctional, parasitic economy, predicated on personal debt, profligate unsustainability, Ponzi-scheme profiteering and fly-by-night transience, the last few defiant flickers of independent nonconformity are being snuffed out one by one. Buffalo had been a rare bastion of bohemianism since opening in a converted mid-Victorian townhouse in 2005, but the friendly 150-capacity venue renowned for its genre-defying range of live music has now gone. All vestiges of culture, authenticity, idiosyncrasy, sociability and sophistication must be swept away when a city sells its soul to become a barrel-scraping, dumbed-down, crude, corporate whore.

GWDIHŴ
Guildford Crescent
Effortlessly cool, unpretentious, progressive and comradely, brilliant music venue Gwdihŵ opened in 2008 on Guildford Crescent’s alluring curve and quickly established itself as a shining beacon of Welsh countercultural eclecticism, experimentalism and radicalism amid the morass of deeply conservative low-brow dross that otherwise constitutes the Cardiff ‘offer’. So of course it had to go, sacrificed for the far more important task of assisting landowners the Rapport dynasty in their ceaseless accumulation of wealth. The impotent council’s fine words about transforming Cardiff into a ‘Music City’ stand exposed as the usual duplicitous, meaningless soundbites, and meanwhile the Rapports intend to demolish the whole Crescent for whatever completely unnecessary money-making debacle they decide to inflict on Cardiff (unwanted student tower blocks and a carpark most probably). However, the multi-millionaires have kindly agreed to keep some of the facades, the better to flag up ‘heritage’ sensitivity – an appropriately superficial and contemptuous gesture in a city of stunning shallowness and philistinism. Gwdihŵ, it turns out, was just tŵ gwd tŵ be trŵ.

HARVESTER
Church Street
The humiliation of having a Harvester in the heart of Cardiff halted in 2018 when the heinous chain vacated its Church Street premises as parent company Mitchells & Butlers implemented one of their perpetual retrenchments and reorganisations. This brings the total of the ‘family friendly’ hellholes within the city limits down to three: on suitably godforsaken peripheral roads Circle Way East, Dunleavy Drive and Tŷ Glas Avenue. Whatever replaced Harvester was going to be an improvement, you would have thought – but having popped into ‘railway-themed craft beer bar’ Head of Steam a couple of times I’m beginning to have my doubts. It’s a chain operation of Cameron’s Brewery from northern England, another clumsy lunge at hipsterism for the congenitally un-hip with all the usual trappings present and correct – including the steep prices. Half an hour in there and I began to long for Harvester’s comforting naffness, shabby play areas, sticky tables and gloops of cold greasy gravy congealing on grandad’s chin because he forgot to put his teeth in…

KOKO GORILAZ
Miskin Street
This ghastly Ground Zero for students in thoroughly trashed Cathays closed in 2016 – a non-event that passed me by until recently (the area being out of bounds to a) anyone over 25 and b) Cardiffians). Now it’s Locos Latin Bar, flogging lurid blue cocktails to students past caring that the Degree in Beyoncé Studies is going to lumber them with £50k of debt. 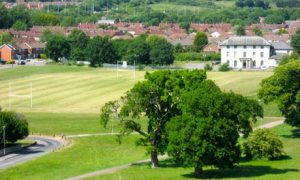 Time now to bring the curtain down on Llanrumney Hall’s 60-year pub phase from 1956 to 2016. I have been waiting to include it in Pubocalypse for a while, but held off to see what the Llanrumney Hall Community Trust would do after taking over responsibility for the crumbling council-owned Grade II Listed building. With the help of a £½million grant from the Assembly government, the startling 15th century mansion in the middle of the sprawling 1950s housing estate has now been sympathetically restored and re-opened as a ‘multi-purpose community hub’ – with no pub. Oh well, all things must pass. Revelation: although born in Gabalfa and weaned in Roath, I’m a Llanrumney boy really. It could be said that I’m a Llanrhymni luminary. I learned all I ever really needed to know in Llanrumney – listening to my Rumney born-and-bred mother’s Llanrumney Hall ghost stories and yarns about Squire Williams, running down to the river between the high hedges of Mill Lane, hanging around the shops on Countisbury Avenue, inhaling the panorama across the wide valley at the top of Elgin Crescent, and observing the rough-and-ready Cardiff sangfroid of sharp, sceptical men on bar stools in old Llanrumney Hall…

WOW
Churchill Way
Wow lasted a bit longer than its predecessors (Stamps, Bar Ice and Glo Bar) in a building that was originally a Post Office, but the cramped conditions and one too many noise abatement notices have triggered a relocation to the former home of Buffalo (see above) in Windsor Place. I would add “there goes the neighbourhood” if Windsor Place had one! Wow is a good example of what LGBTQQIAA+ bars have become in the last decade or so: eardrum-bursting environments where preening, hyper-individualised, alcoholic, sexist morons can display their disfiguring tattoos and bulging pudenda – and that’s just the transitioning blokes!

MISCELLANEOUS
●Cardiff council’s licensing department has been busy lately nodding through each and every application to open a ‘cocktail bar’ (translation: sickly, infantile rip-off drinks for trainee alcoholics with an Instagram account). A motley collection of speculators keep insisting on foisting these corny stunts on the puke-paved streets of hopelessly overcooked central Cardiff. Among the arrivals are Be At One, Dirty Martini, Kapu, The Alchemist and Popworld in St Mary Street, Gin & Juice, The Libertine, Nest 23, Pennyroyal and Rum & Fizz in High Street, Bootlegger in Womanby Street, CFeleven in Cathedral Road, The Botanist in Church Street, and on and on…the desperate names, straining in vain for on-trend credibility, say it all. No bookmaker would give you odds on a single one of them being still in business in five years’ time.
●Brains have opened their new ‘Dragon Brewery’ in Pacific Road and have begun the process of vacating their Crawshay Street premises in readiness for the massive ‘Central Quay’ development of unaffordable apartment blocks alongside the Taff.

Apart from the silos, the new brewery has none of its predecessor’s industrial grandeur. I find it peculiar that Brains, a Cardiff institution if ever there was one, incorrectly state that the building is located in Cardiff Bay when Pacific Road is actually in Splott. Either they are ignorant about the place where they have been brewing beer for 137 years or they’re ridiculous prissy snobs who find the word ‘Splott’ somehow distasteful.